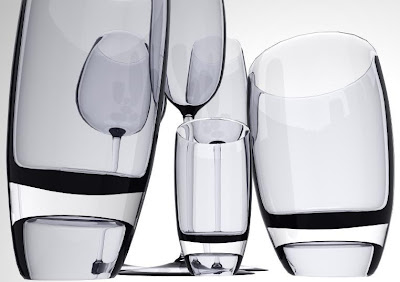 the end approaches
at the usual speed
perfectly on time

so many memories
stirred by the passing
sweet and bitter mixed

days made by me
in my vision
to my benefit
for my satisfaction
at 9:42 AM 276 comments:

In her majesty's secret service

Preparations continue atwitter for several parties. New Years, Naughty French Postcards, and Other Books, all about two weeks apart. We started by cleaning the floors in the family room, dining room, and kitchen. It wasn't pretty. Some furniture re-arranging, and some more vacuuming is still to go. Perhaps we'll even fix a few things and paint the kid's bathroom (but not tomorrow).

I worked on training Amy to drive a manual transmission car. Nobody died. We're likely going to loan her our spare car while she gets a new one since her old one done died.

Actually did some yard work today, walked the doggies, and all that other stuff.

I kinda took the week off from looking for a job since so many people are off work, but I did have a great phone interview which will lead to some in person interviews next week. It would be at Siemens Medical Systems Ultrasound Division (yeah, a little company) in Mountain View. The position is for precisely what I do, and they sound like they really need my skills. I'm hopeful.

Just had to get this out there

I like the boobs and I can not lie
You other brothers can't deny
That when a girl walks in with an itty bitty grin
And those round things in your face
You get sprung, wanna pull up tough
'Cause you notice that top was stuffed
Deep in the bra she's wearing
I'm hooked and I can't stop staring 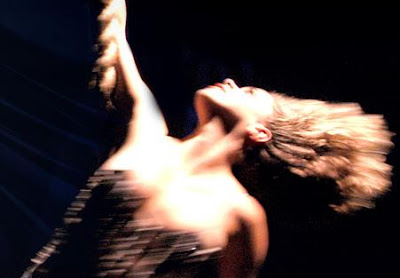 we hurry together
to tarry
to love our chosen one

sleep closes our eyes
extinguishing our vision
dreaming of love's gift
at 9:01 AM 1 comment:

Six Weird Things About Me

Grace (that hot Asian imp) fairly forced me to write this. OK she really just suggested it and I'm just so self centered that I wrote it.

1. I'm colorblind and that makes colors look different to me. It's about as common as left handedness just not as visible. For me and most people like me, deuteranomolous trichromats, two of the three receptor groups have roughly equal sensitivity to light at their respective part of the spectrum. The other one is not as sensitive. (Almost all people have receptors sensitive to three peaks in the color spectrum. The mutation that does not produces an individual with four peaks of spectral sensitivity called a tetrachromat.) Green and brown look mostly alike to me, blue and purple too, and red and orange. It is difficult for me to tell the difference between the green and orange indicator lights that are so common on battery chargers.

2. For me, colors and the numerals from zero to nine, have very distinct and unchanging genders and personalities. So do knives, forks, and spoons. Don't as me how or why, but a fork is female and so are the numerals 4, 5, 6, 7, & 9, and the colors red, and yellow. 4 and 6 are passive, 5 is assertive, and 7 is aggressive, etc., etc.. As far back as I can remember I have thought this way.

3. I am an atheist, which is somewhat less common, here in the USA, than left handedness. For me there is no god(s), and when you die, that's the end. When I go to church events like funerals and such, I think about the religion of the other people as an interesting way of looking at the world around us. When people say they have asked their god for forgiveness or guidance or some support, I think to myself that they have really asked themselves for these things and to the extent that they "received" it, they have helped themselves by the power of their own thoughts. If the mental construct of a god helps them to achieve this, that's great.

4. When my brother and I (maybe it was just me?) got caught looking at dad's Playboy magazines (for the articles!) mom pulled out a bunch of centerfolds and put them up around the house. She thought perhaps this would desensitize us to the sight of naked women and reduce the taboo curiosity that drove us to look. It didn't work at all, but it was quite a conversation starter for guests.

5. I cry when I try to tell people about playing the part of Boo Radley in To Kill A Mockingbird. There were only eight words in the one line that I had to speak, but I had to convey my love for the Finch children and my desire to keep them safe, and I had to demonstrate that I was terribly afraid of people and the world outside my house. Every night the performance moved the audience to a verbal reaction when I delivered my one line, "Miss Jean Louise, will you take me home?" I cannot tell or write about this story without choking up. Sometimes I can't finish the story.

6. When I write poetry I start with the title and write until the poem is done. Other than a feeling that is represented by the title (which is almost always one word), I don't know what the poem is going to be about when I start, or what the words are going to be. When I read the poem later, I am usually surprised at what I find there. Some of my best poetry (OK that's my opinion) was written when I was very sad.
at 5:32 PM 7 comments: 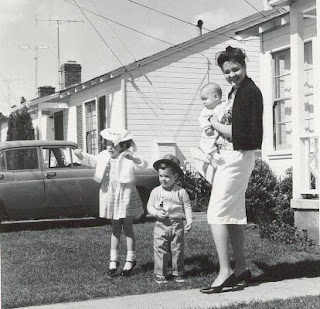 So it's my Birthday. Here are my Big Plans:
So wish me luck on all the un-done stuff and maybe for another year too. Ladies, if you're feeling frisky you can flash your bubbies at your computer monitor in my honor. Extra credit if you are at work.
at 12:30 PM 5 comments:

In which I relate the events of the future

I was talking with some folks today and I realized that I have been unemployed for three months. I've gotten a lot of stuff done around the house but I'd rather be at work. I'm certainly not desperate but I am becoming more "focused" lately.

Focus point one: Physical space. My desk (where I try to find a job from) was a total cluster fuck wreck. It was located right by the front door in the midst of the full chaos of the house. I moved my work area and improved the whole lot by building a new desk. There's even a place for the dogs to sleep underneath it so we could get them out of the back porch. I even have a view now. See? 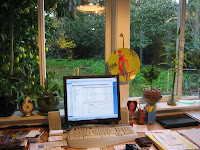 Focus point two: Process. I committed to my Zip Team that I would do the first thing that was necessary in my marketing plan: identify target companies. I have been promising to do this for an embarrassing length of time. I finally got off the dime and started. Goal is to finish the list Friday night.

Focus point three: Commitment. I have been half-assing (Yeah, I made up that word. You got a problem with that?) the job search process by only working on it a few hours a week. NO MORE. Full time on the project is my new plan. I may even keep track of my hours to keep myself on target.