Just about everything has been happening since my last rocky post. We put in more rocks. Kate helped. 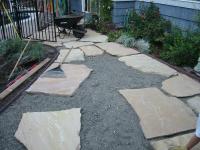 Our friend Lisa G helped. Eventually we got done. 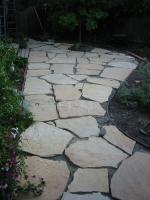 Somewhat unsurprisingly, I got an injury that sounds a little like "hyena". Surgery is planned for this week. No, I'm not kidding.

Then there was Renfaire on Saturday. 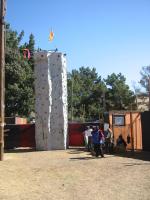 There was ye olde climbing wall. 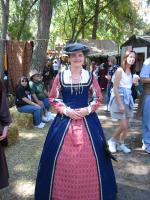 The boys stayed at home. (That's Jessamy in the costume she made) 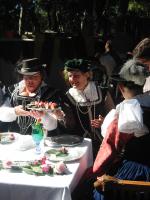 There were lots of people there since the weather was nice and stuff. (That's Sharon as Lady Hundston) 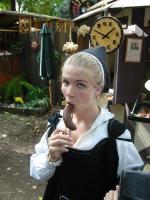 This nice little gal was demonstrating the method he husband showed her for eating a "Monkey Tail" which are sold at the faire. (I'm not making that up they really call them Monkey Tails.) 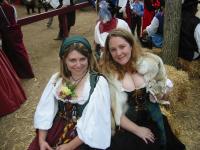 These gals were representative of the beauties that seem to flock to the faire. 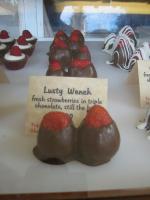 They sell delightful things to eat at the faire.
This one is for you gRace. (. )( .) 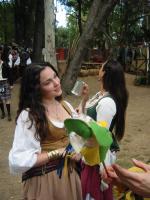 Two more beauties showed up in front of the camera, but one turned as the shutter opened. 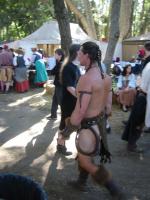 This fellow was the epitome of, um... minimal costumes. 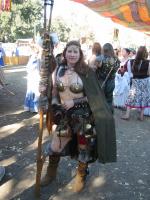 And there was this lady. Hard to know where to start here. 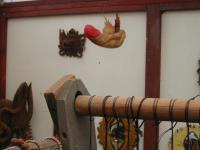 And there was this "art object" in a shop. Look closely. I don't think this functional, but with some imagination... Well let's just say there was lots to see at Faire.

Then I went and helped at strike for Skyscraper. Then the cast invited me along to help them party at a local dive bar. There was karaoke, drinks, karaoke, drinks, a couple of lifted shirts, laughing, and some cast members kissing. I escaped without making a fool of myself.
at 7:00 PM

The stones look great! Sorry you're having to have surgery. That sucks. Thanks for the chocolate covered strawberry lusty wenches. I have only one complaint, though. They weren't even! I like symmetry in my boobs. They don't have to be perfect, but close is good. :) The Renfaire looked like lots of fun.

Sorry grace. Sometimes you get what you get. Just ask um... anyone.

cast members kissing? what? i am in shock. MY actors? but they're so...um...shy.

Bob, I keep telling you, "Stop lifting your shirt!"

Surgery, yow! Let me know if you need ANYTHING!