Events:
1098 - First Crusade: Massacre of Ma'arrat al-Numan - Crusaders breach the town's walls and massacre about 20,000 inhabitants. After finding themselves with insufficient food, they resort to cannibalism.

1914 - The largest one-day percentage drop in the history of Dow Jones Industrial Average, down 24.39% 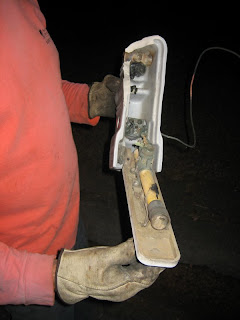 So, late on Sunday afternoon we were sitting and reading and noticed a flicker in the light. Could have been a loose bulb... Then Jessamy came in and said the lights in the bathroom were flickering and there was a buzzing from outside. The transformer on the pole at the corner of our property was makin' noise. So we called the friendly PG&E people. They said they'd be out to check on us in the next two hours. I went and peeked at the transformer again and this time the buzzing was accompanied by arcing sounds and blue-white sparks coming out of the switch thingy that shuts off power to the transformer when needed. (like now) So we called PG&E again... Then there was one last fzzzptphzzpt! and some pieces of ceramic insulator fell from the top of the pole to the street. Then there was no power at all.

We went shopping, like any self respecting consumers without electricity.

A few minutes after we got back to our very dark street and house, the big blue trucks showed up with three fearless animated repair fellows who assured us that they'd have it all fixed in a jiffy. They replaced that switch thingy you see pictured (note the broken bit up on the top left) with a much improved thingy. To paraphrase the repair guy, "Oh we always replace these old things. See how lousy they are?"
at 10:45 PM No comments:

The secret is out so I can tell you all about it now. Our longtime friends Janet and Bob had a party for Bob's 65th birthday. It was a surprise and Janet had been planning it for months. Bob is a train buff and not surprisingly the party was train themed. Janet asked Sharon and I if we could build a train car that had been converted into a diner for the party. That's it above. After we had it put together Sharon said we should have made a tin roof for it. That would have been good.

The party was a huge surprise for Bob despite the fact that Janet had been actively working on it for months and there were 6o guests with a sit-down dinner. It was the classic, "He doesn't suspect a thing!" situation. Happy Birthday Bob!
at 12:40 PM 19 comments:

There is a documentary, 50 minutes long, called Breasts. I, of course, added it to my Netflix queue.
at 6:35 PM 2 comments:

Went to a garden party (kind of) the other evening and had a lovely time. We all mosied over to Nona's Cafe in Pacifica for a dee-licious dinner. When we came into the party we were in the middle of a Tarot card reading. Not the kind where the person reading the cards knows what the heck they are doing, just the kind where the party goer reads the card about a person sitting two people away from them.

I know this is full-on blasphemy for my Tarot reading friends, but I didn't have a lot to say about it.

The Pirate festival in Vallejo was fun. There were a lot of things that could have been different, starting with SHADE. It was right on the waterfront with no shade at all. It also needed more street theatre, though there were plenty of playtrons that made walking around interesting if not outright entertaining.
at 7:40 AM 3 comments:

Oops, I did it again 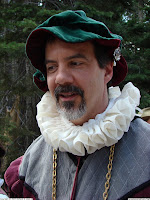 Valhalla Renaissance fair at Tahoe, two weekends in a row. Weekend 1 was interesting as our fearless leader Rydell was more than a little under the weather. We pulled through OK. I drank too much on Sunday and paid for it with a day long headache. Weekend 2 was much more straightforward, nobody was sick and I left the martini fixins at home. There were some long faces when I said I had left the gin and shaker behind.

Our friend Kurt proposed to his now fiancé Danielle. It was a big surprise to her. He managed to get about forty people to pose for a group photo and then got down on his knee and proposed. She hadn't suspected a thing.

This time around I played Master Robert Collier (clever eh?) the steward of the household of the noble hosting the queen. That's a long way of saying head waiter. I like the acting gig because it requires an infinitesimal amount of acting. I looked fabulous in my borrowed costume, and I only got one snarky comment about my hat, but it was from someone who had just proclaimed her (joyful) state of inebriation. I didn't take it too seriously.

On weekend one we went to the Harrah's eat-all-you-possibly-can buffet in South Lake Tahoe. It was expensive but you could have all the bacon wrapped filet mignon you wanted. They had quite a variety of food, all of which was kinda mass-market. We left full.

So all this fun is really tiring and all and I have been dragging ever since. No matter though, I still found the energy to mindlessly surf the internet a few times and sit around a bunch.
at 10:31 PM 20 comments: