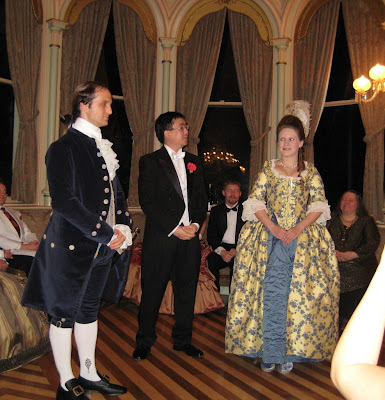 So they figured out what the heck was wrong with the car. Defective spark plug wires. The ones they had just installed.

The oil leak is smaller than I thought. It might be a case of - that leaks a quart every eight months, in which case I'm not spending $$$ to make it stop. As Walter says, "It isn't blood."

So, a couple of weeks ago the Suburban (the parallel parking one) decides to blow the fuse that keeps the brake lights on. And it was now leaking more coolant than before. And it was drip drip dripping more oil on the driveway. And there was that terrible squeaking as the engine ran.

So it was time for a trip to some place for Expensive Repairs.

Now the place that I used to go to was a mile from GMI, where I used to work for a very long time until it was decided that my employment wasn't really that necessary since they were getting ready to get sold. Now this other place, as it turns out, was really great fixing the car. When they fixed it, it was fixed until it broke again and they never surprised me, though I was, let's just say, a Really Good Customer. Only problem was the location, 17 miles though lousy traffic from home.

Fast forward back to two weeks ago. After lots of "I don't know where to take this thing to get it fixed since I don't want to drive into Sunnyvale and then get a ride back to Redwood City" de-motivation for going to the old place, I (fatefully) chose the Firestone Car Care shop in Redwood City.

Their web site (they are a national chain) extols the virtues of the experience they bring to the job. After talking with the technician fellow about the problems, they seemed to understand and everything so I left the rapidly depreciating Suburban with them.

I'll compress this so you don't get bored.

They originally quoted just under $2K to fix everything. Ouch, but OK since there was a lot wrong. Then they took NINE DAYS to do the work. Every day after the third day, the job was "almost done" and I'd have the car that morning/lunchtime/afternoon/evening.

Finally the manager Medi, after god blessing me a dozen times during this process, assured me that he had Personally Driven the vehicle and it was completely repaired. He is the sort of fellow who is so busy telling you that everything is OK and he is looking out for you that you can't get a word in edgewise. So I came to pick it up.

The bill was now about $800 more. I expected some of this because they "discovered" (actually paid another shop with actual expertise to discover - so much for experience) a faulty fuel injector. The replacement of this one component was $555. Then they belatedly told me the giant squeaking noise was the alternator bearing so they had installed a new alternator (not a rebuild) without even asking me about this. $213.99. There was some other minor crap, blah blah blah.

So I get the thing home. Next day I notice it is still leaking oil, not as much but more than nothing. Then today, after a few days driving the engine starts missing while idling. Then the car is hesitating and surging (while presumably dripping oil) when starting from a stop. And there is this whine that tracks with engine speed that I never remember from before. And the transmission (which they drained and flushed and replaced a pan gasket to) is shifting strangely - too early and too late. And the power loss issue that I pointed out to them on day one is seemingly worse.

So I took it back to them this evening to report all these problems. They are looking at it again in the morning. 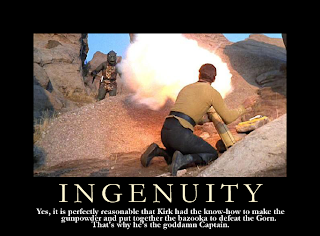 Peggy called me her "substitute husband" this evening while she was thanking me for showing her how to use her camera, and agreeing to weld a broken bit of stuff. There was giggling. She also wants me to cut her a new piece of wood to hold up the gate, and I suppose before the evening's out I'll get tasked with something else, which I'll happily agree to.

Someday, I'm sure this will all work out to my advantage.
at 8:30 PM 2 comments:

Today brought the news that my car is sick enough to spend a second night in hospital. Don't you love it when there is a four figure repair cost for your 12 year old car? Almost makes you want to buy a new one, until you come to your senses and realize that to get a new one is a five figure number. At least we have a spare 22 year-old car that runs great. It did need new windshield wipers though.

So we got a phone for Mona today. I was absolutely shocked to find out that you can get a phone that does not have a camera and an integral telescope and Geiger counter, and that you can get this device without a contract, for $20 after a rebate. Astounding.

Mona's first day at school was administrative entropy at its best. They discard the papers that Sharon filled out last year after three months. Then they had to go to the district office across town to fill out replacements, provide three forms of residence proof, and ferry the forms back across town. Then Mona had to take English and Math placement tests. The math placement test had an error in it, the correct answer was not among the four choices.

Remember: No Child Left Behind! I think that Mona sees the inside of a classroom tomorrow.

Oh yeah, in Germany 16 year-olds can drink, but not drive. You have to wait till you are 18 to drive.

Work is great. Everything I'm doing there is going great. We would like more sales, but who wouldn't.

I'm looking forward to three parties: Otherbooks cast party, Jeremy and Laurie's nuptials, and the Naughty French Postcards party. The drag is the NFP party is in Rocklin - 2+ hours up the road and expected to go to the wee hours, and is the night before the wedding. I'll stay over since I'm not a very good driver at 3AM after drinks and a hot tub. As my friend Gregor said, "There is a distance I will not travel to see boobs, and Rocklin is past that."

I now return you to your regularly scheduled interwebs.
at 10:08 PM 1 comment: 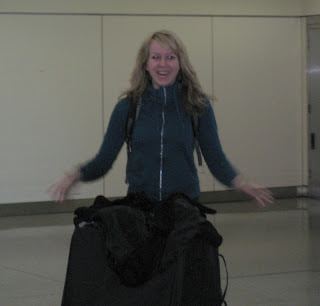 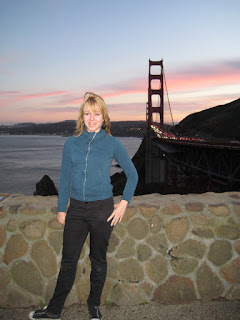 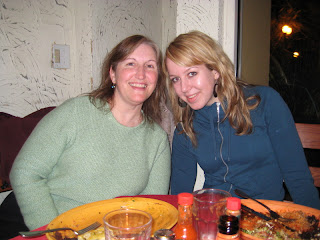 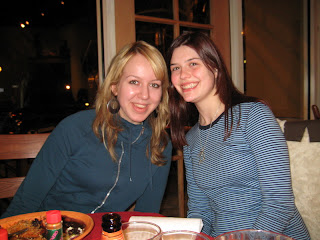 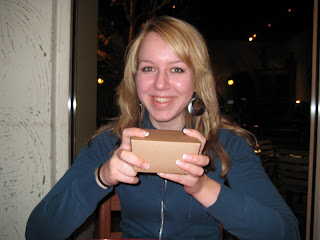 Mona arrived today. We immediately took a tour of what seemed like the whole bay area. Then we went to dinner. The poor dear has been up for about 28 hours now and we think she's gonna sleep pretty well. Good thing too, she's got school on Wednesday.
at 9:05 PM 2 comments:

OK, we went to the ball last night and had loads of fun. Here I am dancing with Laurie, who is appearing here as Toe, one half of Mistle and Toe, the exquisitely cute elves from Dickens Fair. Many thanks to Jeremy Tavan for the lovely picture. 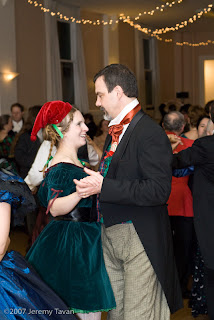 Here's Laurie and her fiancé Jeremy looking cute. Their getting married in a couple of weeks. 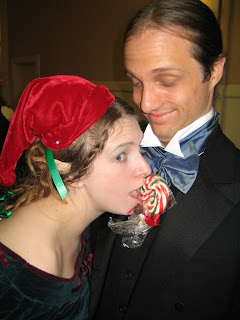 Sharon was the envy of all in her pink gown with lace trimmed sleeves. 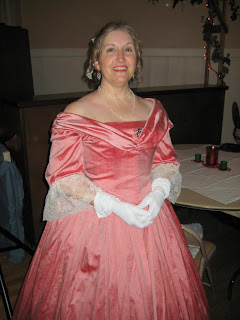 Jessamy and Curly Bob mugging for the camera while Chloe looks on. 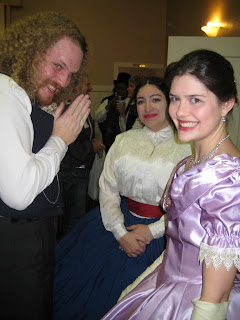 Hello Mistle and Toe! Note the pointy ears. (That's our "other daughter" Amy as Mistle on the right there.) 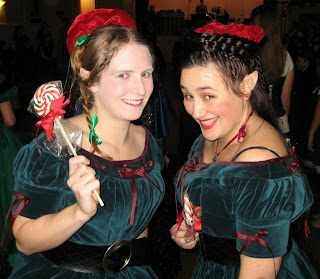 So like halfway through the ball, someone says, "Bob?!" and I turn round to see this pretty face. I didn't recognize her at first until she reminded me that we had done two or three shows together at Broadway West. Hi Siobhan! (In my defense, she'd changed her hair color.) We got a waltz in somewhat later in the evening. 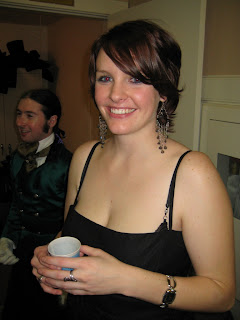 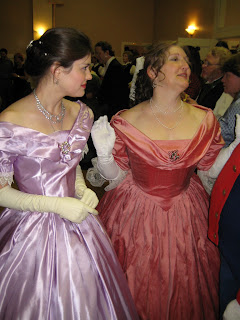 And the last dance went to Peggy so that Sharon could dance with someone who know what they are doing instead of me. Many thanks again to Jeremy. 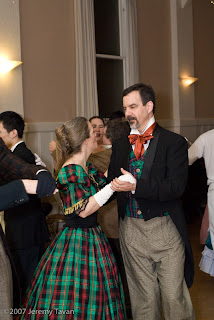 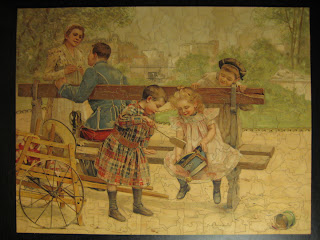 The fun never stops here. This is a 1920's era puzzle that we put together on NYE before the third round of hot-tubbing (which I missed, dang it). I didn't put any of it together, I was making (many) drinks. Had I know it was so cool, I'd at least have watched a little.

And our tix arrived for the ball - I can haz this danz? 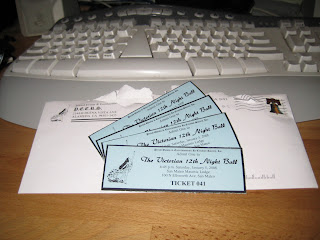 Now I need to make one of those cheezy signs you see chauffeurs holding at the airport so we can hold it up at the airport when Mona arrives.
at 8:23 PM No comments:

Today went by pretty quick. Back to work for a whole eight hours... Got some things done there. Then Leftover Pizza YUM! I think I have The Big Lebowski to watch. I'm thinking BEER.

We just figured out the flight schedule of our inbound German exchange student Mona. She'll be here Monday around mid-day. This'll be a few hours after waving g'bye to the littlest Flaming Scroller for a week in Yosemite. 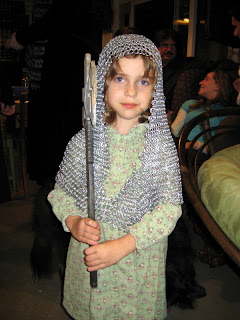 Well, we rang in the new year with a whole bunch of people and a lot of Dixie cups filled with champagne or Martinelli's. It was frickin grand.

There was hot tub and puzzles and drinkies and yummy snacks and waltzing in the kitchen (3 couples!) and lots and lots of laughs. We took funny pictures of spilled drinks, ham being eaten, and a wee guest in a chain mail cowl.

At two minutes past midnight, I called one of our dearest friends and confirmed the secret I'd been keeping all day; that our other dear friends had indeed been married at midnight, exactly one year after their engagement. Classy and SO romantic.