In which I relate the work related...

Work, in addition to paying for access to the internets, is engaging and for the most part pleasant. The only thing about having people who work for you that gets my goat is that you have to deal with peoples' insecurities. bleagh.

Now back to your regularly scheduled internets.
at 9:14 PM 2 comments: 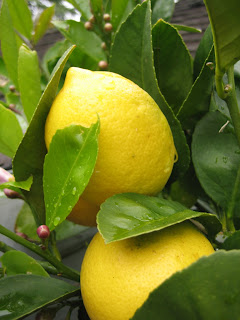 rain falls
a spot on the paving
gray still sky

hope plays a tune
softly
in the next room

honeyed notes
pulling open the shutters
the scent of lemons

amidst plenty
all choices open
nothing to do

watching the rain
at 4:45 PM No comments:

“Remember me in light”
Ray as "Henry, the old actor" in The Fantasticks
Good bye Ray. You really made a difference and that's very good.

Wow that was bad

Last Friday (the 13th) (I know, bad blogger posting six days afterwards...) we hosted a few friends to see two of the worst movies ever produced, Tarzan the Ape Man, and Bolero, both starring Bo Derek's beautiful perky 36 C cup breasts. Man alive she has (OK, had in the 80's) very pretty breasts. Too bad they starred in these movies with a woman that cannot act, directed by their owner's husband who cannot direct, and written by their owner's husband who cannot write. Apparently they were so outraged by the debacle that they attempted to flee frequently only to be thwarted by pectoralis muscles holding them fast to Bo. Poor pretty breasts.

So to give you an idea of just how bad these movies are I will list a few problems we saw.
Seriously, these were the worst bad movies EVER. If you want to impress your friends with how bad a movie you can pick, pick Bolero.
at 8:34 PM 2 comments:

There are lots of plants coming back to life in the front yard. For a while there it seemed as if the place had suffered a fatal blow as if Krusty the Clown belched all over it or something else awful had happened. Everything is at least a foot tall again. We only lost about five plants in the hard freeze. To counterattack, Sharon got some hardy banana plants that should survive down to 20F. We also got some nifty planters to put the two hibiscus into. That way we can move them under cover when old man winter returns.

We made it out to the SF Zoo on Sunday to help Pete celebrate getting slightly older. Fun was had by all, even Danny who insisted that he wasn't going to enjoy it. Here is a pic of the meerkats, the cutest animals we saw. 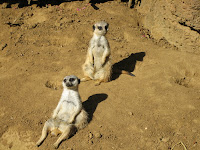 Do you remember all that (you pick the adjective) music I listened to in the late seventies early eighties. Like Devo, and The Clash, Led Zeppelin and other children's music. All those lyrics are stuck in my head. Nearly every day I remember one because of something someone says, and I usually have to check myself to keep from finishing the line in the lyric.

Speaking of that time, I was/had just finished up high school. In high school I had a teacher that made a real impression on me. One of only three that I can remember the names of. He had a VERY dry wit and had seen all that the teenage species had ever come up with. He wasn't going to miss a thing you ever said, nor would he let you give him ANY crap. He motivated kids to give their all, all the while shaking his head at what amateurs we were. He called girls muffin; not as a come-on, that would never have passed his lips, but as a sign of sincere appreciation for what girls of that age really are.

He taught me a lot, and I worked hard to please him. He was also my best friend's dad, but that NEVER mattered to either of them. I mean that my teacher treated his son just like any other student, and my friend treated his dad with real respect.

Over the years we maintained some contact, and this last year I got a chance to work with him once again, nearly thirty years after I left high school. He played a great comic role in a wonderful musical about a silly TV show. He was perfect in the role.

I got an email from his wife a few days ago. He has inoperable cancer, and his prognosis isn't very good. The lyric going through my head now is, "It's a shame about Ray" because it really is.

Here he is doing what he loves, putting a smile on people's faces.
at 8:38 PM 7 comments: