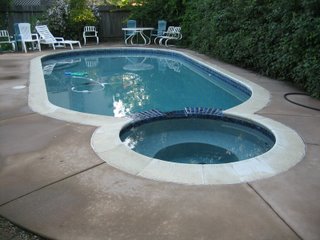 Well here she is; wet, warm, and shallow. She cleaned up pretty nice I'd say. Sorry about the double entendre.

We'll be entertaining our Otherbookistani friends Saturday, and anyone else that flies out here from Birmingham. *wink*
at 6:58 PM 2 comments: 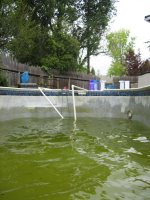 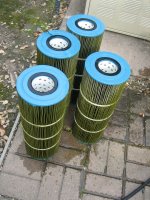 and pulling out the nasty old filter cartridges and bailing it out to get the last little bits of icky out and scrubbing it out with bleach... 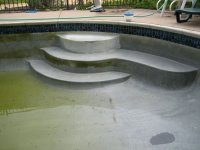 I refilled it with fresh water, (Danny helped) 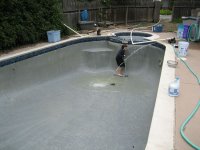 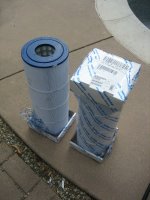 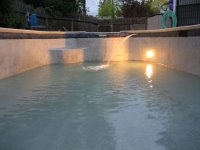 I am lovingly conditioning the new water to be perfectly balanced and clear. My plan is to keep it very very nice all season.

I hope it is really friggin hot this summer and that you all come over and enjoy the pool with us. Otherwise I just wasted a perfectly good Sunday.
at 11:04 PM 9 comments:

Way back when dinosaurs roamed the earth (the early eighties) this is what yours truly looked like. Please note how little of my beard is actually filled in. The moustache and beard don't really connect. The shirt I'm wearing says "SHOWN ACTUAL SIZE" and I got that wool Pendelton shirt at Disneyland. 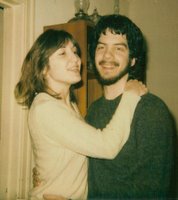 tears touch my cheek
when in pure light
faeries might instead

the storm now passed
with only memories
left in the wake
of tears
at 3:11 PM 4 comments: 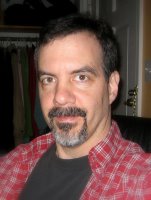 OK, I'm a copycat, and the shot lacks "art" but I'm so attractive I felt it was a shame not to post yet another picture of myself on the Internet. I'm sure you agree.

I feel pretty good today. And as Billy Crystal once said, "When you look good, you feel good." Since the reflexive property seems to apply more often than not, I'm gonna guess that I look good since I feel good. See how easy it is to delude yourself!

And today I did some gardening in addition to working AND filling a prescription for stuff to clear up my snotty nose. I did a lot (for someone with pesky nasal discarge) and I deserve some shameless self aggrandizement. Woo hoo!
at 8:55 PM 2 comments:

I went to visit the ducks today on a little walkabout. It must be Spring. I saw two mama ducks with little ones. The first had 12 swimming alongside and behind her. The second was perched just onshore with 5 little ducklings all nestled together for warmth against the April chill. They got up when I walked by on the path and one wee duckling leapt into the water, then scrambled out as I was walking away. The little ones had wings about 2 inches long. (note to self, bring camera to work!)

They* say that Spring is the time of renewal and rebirth, awakening, fresh starts and so forth. It seems so here in the nearby ponds. It feels like it in a lot of other ways for me too. I hope you too (gentle reader) are finding your own new beginnings as the days get longer.

Saturday Night Live had a skit once that purported to show union pot growers/processors touting the benefits of union grown and processed marijuana. They had a little song they sang at the end of the skit:

Look for
the Union Label
When you are buying
Joint, lid, or pound...

This little song has been going through my head all day. I don't know why since I can't remember the last time I smoked pot. They say it harms your memory though...

Even with the stupid song and the being sick this has been a pretty good week, a hard week, but good.
at 10:15 PM No comments:

Lucky me. Tuesday brought the flu, or at least lots of nasty symptoms. Feeling much worse now than when I left work at 3. Serious aching and other pleasantries. Send chicken soup thoughts.
at 8:01 PM 4 comments:

How did Monday get here so soon? It seems a shame to ruin a perfectly good weekend with a Monday, but we do it all the time.

Isn't the world news great? It seems that peace and love is breaking out all over the mideast, dubya isn't gonna nuke Iran, and France has found a way to avoid the laws of economics. Oh, and people aren't starving in sub Saharan Africa, and Mexico has finally achieved long sought after prosperity for its citizens so they don't have to risk their lives coming to America to break their backs making our service economy hum like mad. Oh, sorry. That was just a dream sequence. Remind me to ask Karl Rove and the other neocons about getting things patched up.

At least you can run Windows on a Mac now.

princess we love you so 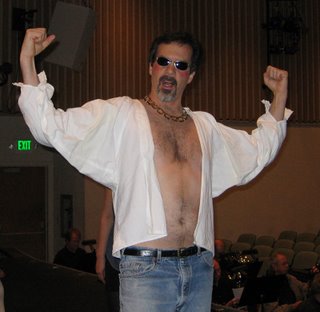 Well, tonight's performance of Mattress was really grand. There were lots of laughs from our very appreciative audience. The performance itself was pretty electric as well, with all of us ending on a high note, so to speak.

What a great bunch of people I have had the privilege to work with, and a wonderful rendition of a funny, if somewhat dated show. I hope to see some of the people again, though as these things go, you often don't.

everything is funny
nothing is important
nothing gets done
until tomorrow

When I was a kid and living on 2nd avenue, there was a fellow down the street who had a white Rambler. Once I was riding my bike down the sidewalk (bad idea it turns out) and the fellow in the Rambler was backing out of his driveway. I ran smack into the side of the car, slid forward off the seat (the 'banana' seat on a StingRay bike) and came to a stop with the handlebar mount firmly planted in my crotch. Ouch. I remember this event like it happened last week.

My sister dated a fellow who drove a Rambler. It was like tan, or gold or thereabouts colorwise, and I remember that I thought it was cooler than the muscle cars of the time. It had more of a counter culture feel to it; like a VW, but more reliable. He moved to LA for a while, then came back and said it was a very plastic place.

Somewhere in between those two times (I think I was about 12 or 13) I built a boat out of plywood and covered it in Fiberglas. It was really quite a messy smelly operation. I colored the resin bright orange. The boat didn't really work that well. It was narrow like a kayak but had sides that were tall, so it was kind of top heavy. I remember taking it to the construction site where there is a telephone microwave relay station now. (The really tall building in southeast Redwood City) There was a giant puddle like 100 feet across from the heavy rains. I paddled the boat across this which was lots of fun, except it was raining and I got soaked. I also had to carry the boat the six or eight blocks to get there, then carry it home. We took it up to my grandfather's property (31 acres in Lake County) and tried it on the widened creek there. The high sides made it really hard to row. I think we left it up there to rot. When I think back I have to say my folks really indulged my creative spirit and went through a lot to get me in the water with the boat. I bet I can find some pictures of it in all my Dad's old photos.
at 1:10 PM No comments:

This oddly constructed verse is for my friend who came to see me this weekend.

my friend
(like a bear)
is just there
in his lair

his joys abound
uncontained
given away freely
in my home

you look silly
without your beard
but then, so do I
at 9:02 AM 2 comments: