Well, here it is the last day of the last (kinda) single digit year in this century.  Time for a wrap up, eh?

Do you like round (especially even) numbers?  I really do.  So much so that I'll "do things" just to make things come out even. Like when I buy canned goods.  I'll usually get two or four of something - but never three.  If I arbitrarily needed to make something a measured size, I'd cut it to an even number of units - even though I know the units themselves are entirely arbitrary.  I mean really, who would cut a board 59 inches long when you could have cut it 60 inches long?  Seriously.

For this dorky reason, sometimes I think that I'll stop writing this blog on some even numbered post.  (This is 498.)  But of course, I'd never stop at a less than 100 mark -- so in this case the only danger is that I'd stop at 500.  OTOH, (on the other hand) I'm sure that I'd regret stopping and start again, especially since I'm aware how much pain it would cause you, my gentle readers, if I were to stop.  So your stuck with this pretty much until I'm on my death bed.  Sorry in advance to make you have to read all that.

This year brought a lot of changes at work.  My manager was let go at the beginning of Fall, even though we were making our production numbers and meeting other targets.  There was some scapegoating about her termination that had to do with field failures, which were actually latent design and field repair issues.  Ultimately, the real reason for her leaving was financial.  Her compensation increased overhead which reduced the profit margin, and becoming profitable is paramount.  So she "had to" go.  Decisions of this sort are never clear-cut and always involve a lot of intangible factors.  She and the new management (the founders were let go by the board (venture capital investors) some time ago) never got along.  This was a huge factor in the action, and the fellow that took over her functional responsibilities is someone with whom she was particularly in conflict with.

I felt angry about it, as did a lot of my coworkers who all ultimately reported to her.  Our feelings were (politely and frankly) acknowledged by the CEO.  We were all (about 20 of us) loyal to her, and then she was let go and we all suddenly reported to her former rival, a fellow that we did not respect for his expert powers (his ability to run Operations), just for his legitimate power (his ability to fire us).  So we all did what we could to make the best of a difficult situation.  Everyone (I broadly assume) has had to accept things they didn't like in order to maintain group cohesiveness.  In my role as a manager, I need to foster group cohesion, even if I'm feeling group tension that I cannot directly control.  Hey, if it was easy they wouldn't pay me.

During this transition period, all of us who had reported directly to my old manager now reported directly to the new fellow.  This was hard for me because the new guy was new at operations, unlike the person he was replacing who had been in operations for three + decades, and me who has been in operations for three decades.  We didn't always agree.  And he is the sort of fellow that really wants people to agree with him.  At a few points I wasn't sure I could continue working there.

We were all informed (at what I call in my internal monologue "the hatchet meeting") that our new boss would be re-evaluating the whole reporting structure at the end of the year, and that we needed to "step up" to demonstrate where we fit into the company.  That was about three months ago.  A few weeks ago, four other people were laid off, again for overhead reduction reasons.  At that meeting, our new reporting structure was announced.  Now I report to a former peer of mine, a very worthy fellow.  I'm as pleased with this outcome as I think I could have been in the whole situation.

In reward and recognition of my abilities and accomplishments I have also been granted a promotion to Director (as of a few weeks ago) and have recently moved from a cubicle to a private office.  I have to say that I am honored.  The office doesn't totally make up for all of the personnel unhappiness, but it is a recognition of the high expectations that I hope to fulfill.  It is a worthy challenge.  I look forward at 2010.

But what about the fun stuff, you ask?  Well, yeah there was a lot of fun stuff too.  As you recall we had the house painted, OOoOoOoooOoooOOOOOOooo.  We still like it a lot.  We had all that renfaire fun that you all read about.  And then there was the Dickens Fair (w00t!) and all that fun.  We entertained quite a few guests here at the casa and had lots of laughs.  We vacationed at Lake Tahoe, and looked at houses there.  Our kiddies all got a bit older (though Sharon and I no longer age at all) and they continue to progress through school and become more recognizable as the adults they will ultimately become.  We are proud of them.

The hobby that ate my world

So I have this little hobby called Dickens Fair.  It is about (at least) twice as much fun as Renaissance faires.  Maybe ten times as fun.  And it is far more concentrated.  Instead of taking several months to have nine or eleven fair days - it only takes a month.  So there is this period where for about six weeks, I don't see my house in full daylight.

So the pool gets leafy ('cause it's Fall) and essentially nothing but work ($) and fair get done.  Somehow I have to slot in some Christmas shopping.  There are no projects done.  It takes all of my will to get enough sleep that I don't get a full blown cold (I'm writing this with a sore throat) and I feel like I've been hit by a full logging truck.

The weeks flow into one continuous series of mornings that start with an alarm clock and a routine that is all planned out in advance.  No sleeping in, or impromptu anything.  It's relentless.  It's exhausting.  My feet hurt. Blah blah blah blah.

But lemme tell you, I wouldn't miss it for anything.

Every day is Christmas Eve.  It is an all-day party with several hundred friends.  It has its own smells and sounds.  There are countless rituals.  There's flirting and compliments.  (There's even outright nudity!)  There's pretending and dress up.  There is delight in the eyes of hundreds of strangers when you pointedly "Happy Christmas" them.  There is dancing and laughter.  There are drinks and jokes.  There are several hundred new people to meet.  There is an opportunity to see so many things that you can't see them all.  There is a continuous web of new friendships and experience that is unlike anything else I've experienced.

Our show (the whole incredible thing) is beloved by thousands, praised all around, and better than anything like it by all accounts.  There is an assortment of talent and commitment that always amazes me.  It is much the same but totally fresh each time.

When it ends, I count the days until it starts again.  It never lasts long enough or comes too soon.

We put up the most awesome Xmas lights ever.  They are super sized lights that look like the little ones that go on the tree but they are about a foot long overall.  When I say we put them up, I mean I did after Sharon thought of the the idea, searched for them online, bought them, and waited most of the year until it was time.  The only problem with waiting that long is that Dickens fair has started and I am not home when the sun is up or when it is more than 45 degrees outside.  So the deed was done in the dark and cold.  But it looks cool.

I bet you want a picture, right?  Of course you do. 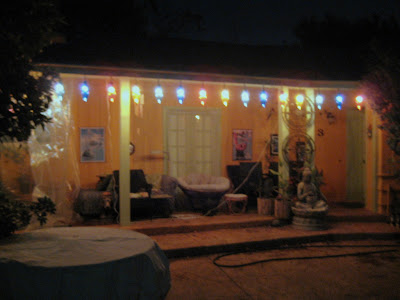