Yeah, like the blog thing. Uh, I got all busy and, yeah, I didn't, like, blog. I beg your forgiveness. Here's the updit.

Do you remember Savemouse, that fabulous blog that went dark? Well, you can read it all again on the Wayback Machine here. As Mouse says: Hulee feckeeng crapp!

So we went to the SLO Renaissance Faire. It was a blast furnace and we had a great time partying with our friends in Morro Bay.

Then there is the inevitable project - The Cannery. This is the area round the side of the garage whare the recycle bins and the garbage can and the hose are kept. This involved the aforementioned post holes, and some fencing, and a gate, and a hose bib to be plumbed, and some pavers, surrounded by a concrete curb, and a motion activated light because it is pitch black out there when the sun goes down. I should be finishing the light right now instead of blogging.

As if that wasn't enough, there was the inevitable re-painting of one of the bedrooms, the re-assembly of the desk, the pool maintenance. Oh yeah, there was work too.

So at work, I actually get to hire someone!! If you can do new product introduction, manufacturing engineering, and instrument assembly, get a hold of me. Check the official listing here.
at 8:52 PM 6 comments:

So tired. Demolished fence bits and dug half a hole for one of four posts. Feel like I've been hit by a supertanker. Ugh.

With pen in hand 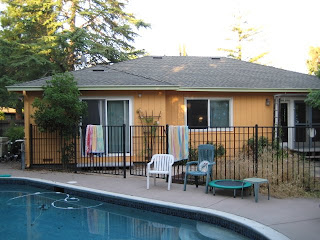 I write to you my dear gentle readers to share a story of three men, some ladders, a mini pickup truck, and several buckets of paint.

They arrived on Monday morning, shortly after I got to work. While I toiled away at making a brand new piece of instrumentation made largely of aluminum, the began the awesome transformation of our 60 year-old house made largely out of wood.

In the twenty-year span since our house had been painted it had become really shabby looking. In places, the paint was peeling off, not just a little here and there you see, but in great large areas. It was noticeable to even the casual noticer. It was, my friends, an abomination before men.

Now in addition to the condition of the paint, there was the color. The last color selection was done by my beloved mother-in-law. Her tastes are more traditional than my dear wife's. (Sharon's more avant gardé color palette was but one of the several reasons that I proposed to her, and not her mother.) Thus the muted blue-gray with darker gray trim was termed "boring" and "ugly" and a flock of other pejorative adjectives - sometimes in thrilling combinations with modifiers like "butt-ugly" (my personal favorite) thrown in for good measure. I, the dutiful colorblind husband, wholeheartedly agreed.

Thus the search began for just the right color combination. We have been discussing this (rather Sharon has asked me about my opinion of various colors to which I have always replied, "It doesn't matter to me, Honey.") for literally several years now.

Back to Monday morning...

Having hired out several of the huge jobs - roofing, exterior painting, obstetrics - it never ceases to blow me away how much work you can get done in a week if there are several of you (or ten of you) and you don't live at the house and therefore aren't subject to requirements of sleeping in, putting away laundry, filling/emptying the dishwasher, fiddling with the pool, or any of those other things that distract me when I am working up the gumption to actually get started on a big job. (Sorry about the run-on sentence there.)

In five days, these three guys got as much done as it would have taken me 15 days to finish. Amazing. They'll be back on Monday and probably Tuesday too to finish up the trim. Seven days for them would have been an entire month for me. I have a lot of vacation time, but not that much.

You can see the view from the pool in the picture at the top there. It's fuckingorgeous. (Try and just look at the house, not the towels hanging off the fence.)
at 10:06 AM 3 comments: