So part of the reason that that perfectly good pump #2 went tits-up was it was having to work too hard.  That line didn't have a check valve and both of the pumps went to the same tee and then into a pipe that was the same size as the outlet of the pumps.  So when it was really raining hard, pump #2 was putting part of its water into sump #1 if pump #1 wasn't running.  And when both pumps were running at the same time, they were each trying to stuff a 1-1/4 inch pipe full of water into a single 1-1/4 inch pipe.  That's too much, and the effect was that pump #1 (where the flood was) could not get rid of its water fast enough.

Today I got a few fittings and used up about 50 feet of pipe running a second drain line for pump #2 starting where the two pipes used to join up. And this is 1-1/2 inch, so that pump #2 won't have to work so hard since it's pumping through about 90 feet of pipe.  This also involved 50 feet of sweet, sweet trench.  I'm gonna hurt tomorrow.  Check out these super-sexy trench shots. 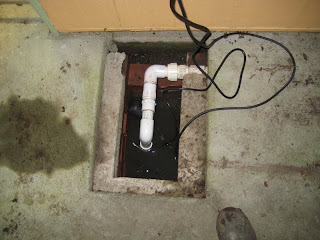 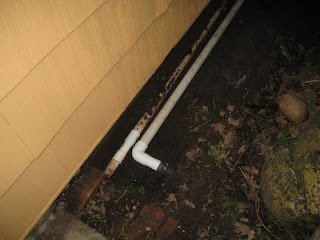 This is where the pipes used to join and co-mingle their dirty juices.  Now they are torn asunder, flowing side-by-side to their ultimate destination; the gutter.  The do get to join hands for the last twenty feet or so, but that's in a big thick FOUR INCH PIPE. 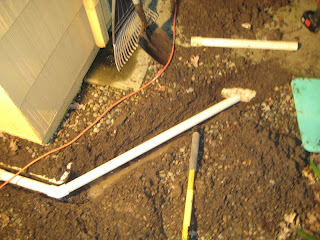 As the Beatles said, that's the end - o little girl.  Note the artistic flair of the 45 degree entry into the FOUR INCH PIPE.  Almost brings a tear to the eye, don't it.
at 8:57 PM 30 comments:

So much to say

More blather news!  So I mentioned good news at work, but at the time I couldn't elaborate since it was uh-fishall.  Well now it is, gentle readers, and if I may bend your ears twice in less than 24 hours I'll let you in on it.

For a long time at The Company, we've had a fellow in charge of field service - sending people out to fix something that broke or to do something more complicated than can be handled by a bio-molecular scientist with a PhD.  Well, he's gotten too busy to do that and we at The Company also want to apply a lot more rigor to the Quality Management dimension of the field service function.  That's where I come in.

So starting Monday, Field Service responsibilities become my responsibility.  Two more people will be reporting to me and I'll have the charge to implement an effective integrated service management system.

So much boring blog-worthy stuff to write.  Too bad my blog layout makes you have to scroll so much.  I suggest you prepare to hit the PageDown key.  (Hint, it's immediately below the PageUp key.)

First, The Great Flood.  "The Hell?!", you say.  (Pretty sure Hell is capitalized, right?)  So last week we had a long heralded series of storms.  The weather nannies told us over and over that we'd better be ready Or Else.  So like a smart sheep, I cleaned out the sumps so the pumps would not clog.  I cleared out the gutters.  I picked up literally hundreds of pounds of leaves.  I checked that the pumps were plugged in, turned on, and that the floats didn't hang up.  I even cleaned the filter screen, fer fucksake.

And then it rained.  A lot.  (No problems so far, feeling smug and stuff.) Then the rain (which continued like a PBS Pledge "Break") ruined my Monday morning.  It (Monday) was all normal and stuff, and I was buttoning my shirt when No. 1 son comes to tell me that there is water coming into the garage.  So I put on my slippers and a tee shirt and went to look.  Sure enough, my adult son can identify water coming into the garage.

This is what the outside looked like.  This is well into The Catastrophe, and as you can see the water is about two inches deep, about one inch over the threshold of the garage.  There's a little dark spot just to the right of the door and underwater, right next to that pipe.  That's one of the two sumps.  It's about 20 inches deep.  Oh, and IT'S OVERFLOWING! 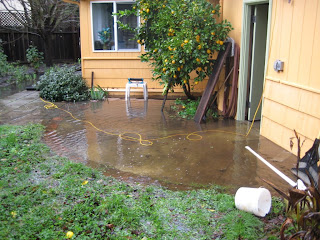 So while I'm working on this garden water feature (before the picture), it is pouring rain.  Of course the dog came out to "help" me.  I would look up from my damp jihad against the storm and see a very wet dog, staring at me.  Eventually my coat and pants had soaked through.  Turns out that one of the pumps would only pump for about a minute before it would overheat and shut off.  Then ten minutes later it would work again for another minute.  Bad bearing, I guess.  But the pump looks pristine! 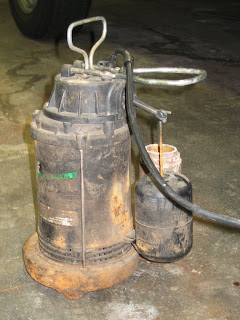 So the better half of our marital brain trust posited to her frantic husband that we should just let the water run through the garage and down the driveway.  Then she came up with a nifty garden hose dam that kept the water in a pretty good stream, 1/2 inch deep, 24 inches wide right on through there.  See... 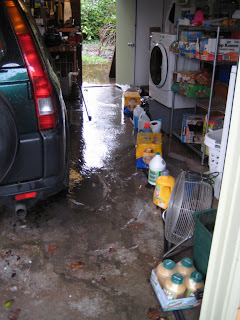 At first I thought this was madness until I saw how well it worked.  It kept draining at that rate for the hour or so it took me to go to the local Orchard Supply Hardware.  When I got there, I discovered about eight other people all buying pumps. I got the LAST 1/3 HP pump on the shelf, brought it home and plumbed it up and proceeded to drain the yard.
But I still got to work by about noon.  And our lodger slept through most of this.
at 10:55 PM 2 comments:

Here is the Readers Digest version

I love this song

Well, now that the magical 500 posts mark has been surpassed (amazing, I know) I'll need to figure out what to say for the next 500.  I doubt I'll be lucky enough to have to buy another lamp for my refrigerator, so I'd better work on polishing my wit.

How about a joke or a poem?

Neither, eh? Mmmkay.  I'll have to think of something else.

Windows 7?  OK!  So I got all converted to Windows 7 at work since we will soon be shifting our product to that platform.  It's pretty different.  My job is to figure out how to do everything the Windows 7 way so I can be ready for the big switch.  Things like application installations, driver installation and settings, USB configuration, folder management, scripting.  Stuff like that.  Are you already an expert?  Gimme a jingle.

Oh, so it's about to storm for five days straight, so I spent the morning getting the sump pumps all ready to do their magic.  Glad I looked, since one of them was unplugged!  Lots of mucking out, leaves, filthy filter screens, and stuff like that.  I know how to party.  I should have taken pictures.

Do you think those fundamentalist preachers and radio hate talk show hosts that said that the earthquake in Haiti was the victims' fault (Pat Robertson) or that Obama was going to use "his" response to burnish his image with American blacks (Rush Limbaugh) are full of crap?  It may be confirmation bias, but so do I.  I was thinking that I'd transform my blog into a running political rant, then I remembered that you might not want that, seeing how there is so much of that out there already.

So in a few spare minutes at work, I've been following the federal court challenge to the constitutionality of Proposition 8 in CA.  So far, the plaintiffs (the people that want prop hate 8 overturned) have been presenting witnesses to press that case.  Next week (I think) the haters defense will try to tell us all once more that gay people getting married will harm children, make more kids "try out" being gay, reduce our nation's ability to produce enough citizens, oppress religious people, invalidate the unconstitutional mandate will of the voters, bring on the next phase in the gay agenda: legalizing sex with young children and animals, and all of the other hysterical lies they told to scare all of those voters into stripping gay people of the right to marry the person of their choice.

I think that Judge Walker will overturn Prop 8, that there will be immediate appeals (which are no doubt already prepared), and that the case will be before the Supreme Court before very long at all.  I can only hope that at least one more of the "Conservative" justices will step down and be replaced by President Obama before the case is argued, and or that the likely swing justice, Kennedy, will take the correct legal view, which is:

The state has no compelling interest in keeping people from marrying those of their own sex.  The converse is true:  The benefits of marriage that accrue to ANY married couple are beneficial to the children (biological or adopted) of the couple, and that the union benefits society as a whole, and the purported harms that those in opposition to same-sex marriage are so loudly warning of are not, in material fact, likely.  Further, the continued prohibition of equal recognition of the union of a same-sex couple is unconstitutional.

Well, it happened.  The inevitable march to a number of posts evenly divisible by one hundred, and by five, and a whole lot of other numbers, like 250, and four, and 25.  But NOT three, or seven, thank you very much.

So what has happened in the intervening years since I started this?  Um, I suppose we could just go back and read the posts, (tl;dr) but here's a handy, totally incomplete summary in absolutely non-chronological order and with no relative significance whatsoever implied by the groups of eight:

I learned a lot about myself.
I saw a lot of boobs! (. )( .)
I built a stone patio.
I had hernia surgery!
I built a fence.
I put in windows.
I installed Windows.
BAD MOVIE NIGHT!

I bought at least four computers.
A friend of mine moved away.
I learned to dance.
A friend of mine lost her father to cancer.
A relative of mine was divorced and very happily remarried.  Congrats!
I brought home the bacon.
I collected unemployment.
I found a great new hobby that at first I thought I'd hate.

499 Bottles of beer on the wall

We had a fabulous party to celebrate the new year.  Lots of fun people came over to visit and celebrate.  Nobody had any drama.  At all.  We whooped it up until about 4:45 AM.  That's when the last puzzle got finished.  Whoopee!