today a friend posted that her grandmother - her inspiration, the woman that made her who she is today - has three months to live...

today my neighbors at the corner met me on a walk and I noticed she was expecting (a boy), she said she is six months...

in three months my friend will grieve

in three months my friend will rejoice

Perhaps I'll live as long as I already have so far, but it is more likely that it won't be quite that long.

My life is often joyful, and I try to bring joy to others (perhaps even you). In case I've overlooked thanking you for the joy you've brought to my life (however small it may have been) let me say, thank you now. Eventually, (in a long time) like my friend I won't have a chance to say that.

Sadly - and I really mean that - I returned that cute cute doggie to the SPCA today.

Despite the cuteness, he was overwhelmed by the activity level in our house, deeply anxious without his brother and sister, and unaccustomed to being with people. This manifested itself in fear behaviors like dropping his head and tail, slinking away from us, peeing when we petted him, growling and snapping, and the last straw; biting both of us when we tried to pick him up, on several occasions.

I sincerely hope that another person or family will have the time and patience to socialize the little fellow.
at 2:53 PM 6 comments: 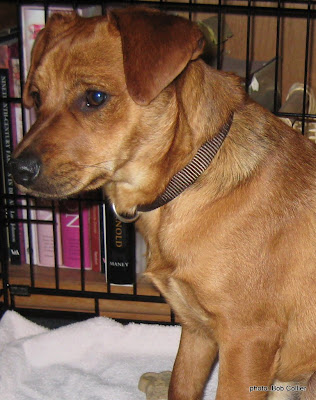 Not quite sure what to call him yet. "Charlie Brown" is the front runner. 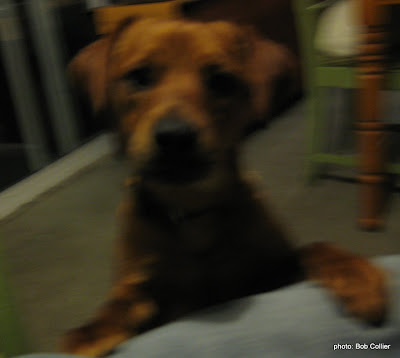 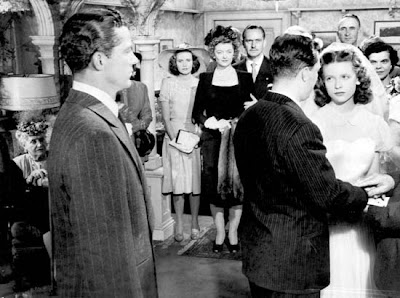 Yes, I watch a lot of movies the main attraction of which is nipples but from time to time I throw in a "real" movie just to keep the folks at Netflix guessing. Tonight, on Kate's recommendation I watched the 1946 Best Picture winner The Best Years of Our Lives. It was quite a worthy flick.

The story is that of three men returning from WWII, their friendship, and how their lives have been changed inexorably by their time in service. Great performances all around and a very long and intense exploration of how delicate our lives really are. It is clear that in some circumstances you simply must accept the fact that the past is the past and cannot be relived or remade. If you have 2 hours and 50 minutes and you want to learn about life and love and loss, you should watch it.
at 11:42 PM 2 comments: 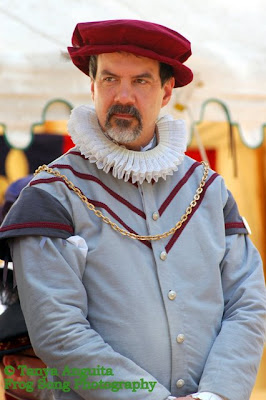 Thanks to my friend Tanya for this picture of me in my Renaissance duds!

As I was saying elsewhere (tribe) about the latest dust up between the American Family Association and Human Rights Council...

WASHINGTON – The Human Rights Campaign, the nation's largest lesbian, gay, bisexual and transgender civil rights organization, today issued a national action alert against the American Family Association's (AFA) one-hour television special called "Speechless: Silencing Christians," which is promoted to "reveal the truth about the radical homosexual agenda and its impact on the family, the nation and religious freedom." Within an hour of that action alert announcement, the Grand Rapids, MI station which had planned to air the deceptive programming rescinded that offer. (story continues)

Here is what I have to say on the subject.
Yes, HRC is nominally doing what AFA "says" they are by attempting to (and in this case succeeding) prevent the AFA from presenting their message.

But "freedom of speech" (First Amendment speech) doesn't mean that other groups cannot protest to anyone that they choose to about your speech - or your proposed speech. It means the government - though force of law - shall not abridge your right to say what you like, no matter how much it offends. That isn't what is happening here at all. The law has not entered into it, nor is it remotely likely that it will.

The AFA wants people to believe that equality in marriage and family law for LGBT persons = state sanctioned destruction of religious freedom. Their arguments are many and fallacious. Religious freedom (the Constitutional kind) means the government - through force of law - shall not impose a religion on the citizenry, nor shall it punish or reward a citizen on the basis of their religious beliefs or lack thereof.

HRC's mission is to remove or change laws that punish citizens unfairly for their refusal to accept religiously based beliefs, for that is now clearly the basis of the discriminatory laws. This fact is made plain by the groups that choose to oppose the HRC and their espoused reasoning for the opposition.

Let me be clear. HRC are the good guys. What the AFA wants is to mold American law to enforce Christian values onto everyone whether or not they are Christian. This means keeping existing discriminatory laws, legislating around court decisions that eliminate discrimination (Prop 8). They try to dress this up as "protecting our culture". Here are some of their lies and the truth they don't want you to know. (From HRC.org)

1. Lie: If hate crimes laws are passed, pastors will be prosecuted for preaching what the Bible says about homosexuality.

Truth: Pastors will not be held liable for hate crimes based on preaching anti-gay sermons. The First Amendment protects a preacher from being charged as an accessory to a hate crime simply because of their speech. The Matthew Shepard Act only punishes violent crimes, not a person's speech, beliefs or thoughts. In fact, the legislation contains language specifically protecting free speech.

2. Lie: Legislation that will provide employment protection based on sexual orientation or gender identity will force churches to hire homosexuals.

Truth: The federal legislation contains language exempting the vast majority of religious corporations, associations and educational institutions, and permits all religious organizations to condition employment on compliance with its significant tenets, including ones barring LGBT employees.

3. Lie: Homosexual acts have a key role to play in the spread of all STDs and HIV/AIDS.

Truth: HIV and STDs don't distinguish by gender, race, religion, sexual orientation, gender identity or any other characteristic. Statements such as those made by the AFA in this video hamper efforts to prevent the spread of sexually-transmitted diseases by spreading ignorance and misinformation.

4. Lie: Allowing the government to redefine marriage hurts children because studies show children need a mother and father to do well in life.

Truth: All scientifically reputable studies on the subject of same-sex parenting show that the sexual orientation of a child's parent does not affect a child. Furthermore, all leading children's welfare and rights organizations conclude that there is no measurable difference between children raised by loving lesbian and gay families and those raised by different-sex couples.

So, AFA - DIAF. PS. You have the ugliest website I have ever seen. 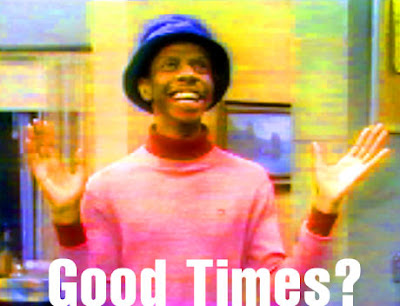 When I look at the tee-vee news and read about the world on teh interwebs it all seems so incredibly BAD. I like to try and look on the bright side because I'm a Pollyanna an optimist.

We did manage to elect a president who can form a sentence and pronounce words and stuff. And he is talking about running things differently than the previous fellow who, by all accounts, fucked up. That's good. Seriously, I think the feature that the liberals really have over the conservatives is the embrace of moral relativism. Everything isn't actually black and white and you really do have to think critically with an open mind and consider other people's perspectives is you are going to govern a diverse nation. Unflinching dogma is so last century.

I have actually read about people coming to the realization that people who were essentially playing giant shell games with money that didn't exist, SHOULD NOT be rewarded with 8 figure salaries for essentially CREATING NOTHING. I think that's progress.

House prices are coming down. This might allow mere mortals to buy them without pawning a testicle. It will also put a stop to the proliferation of "Flip This House" shows on the tee-vee featuring bickering idiots. Sweet!

I heard tell of a plan by some Republicans to take some of the money that people have been socking into government bonds (because the stocks suck) and making home loans at 4% with it. The details are complicated, but just imagine what all of us could do with the savings from refinancing tens of millions of home loans. It would make a palpable stab at the foreclosure problem too. That's good.

Despite all the terrible news about tens of thousands of lost jobs, not everyone is getting laid off and not everything is horrible. Are you in a position to hire someone in the next few months? Guess what, you'll have your pick of really good candidates and that will help your company be better faster. That's the position that I'm in and I'm actually looking forward to the hiring process in a couple of months.

Do you think that part of the stimulus package that will soon be passed will be used to fund green power initiatives? I do. I think there is a HUGE industry waiting to be built to harness the energy sources in nature around us that will eventually cut funding to the politically flawed oil producing nations. When they cannot export oil and use the petrodollars to prop up their regimes that oppress their citizens, change will happen. Maybe it won't all happen in my lifetime but I see that we in America are in a unique position to create the technology and sell it to the rest of the world. That, my friends, will create millions of jobs for many decades and provide the key to change the face of the world.

Peanut products anyone? I think the recent debacle with the salmonella tainted peanut butter might spur food safety efforts to be better. That's good. I heard about a plan to simplify the patchwork of oversight. That sounds good.