The drywall saga in the kitchen is nearly to an end.  The next goal is to get the pantry - with its wee sink - finished enough to use as a ersatz kitchen while we demo and re-build the remaining counter with the sink.

When will our nightmare project be really done?  Your guess is as good as mine as I tend to think each step will take about 1/3 of the time that it actually takes.  Maybe I need to multiply myself.
at 8:48 PM 1 comment:

So, the kitchen has looked like this for a couple of weeks now. There is progress here and there but it is not fast enough for my satisfacion. 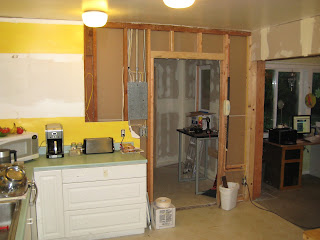 Maybe I should invent magic genies that do it all while I'm at work. I'd call them "contractors".

I got a lot of things done on The Project today. Now we have drywall on the long wall between the dining room/kitchen, the pantry and the long wall have some finishing compound. The long wall needed some of that ridiculously heavy plaster taken down - MESSY!! - and new drywall put up.

We're closing in on precisely which floor and counter top we're going with; progress! It's exciting!
at 10:17 PM 1 comment:

The cocoon takes shape... First a pipe to bring water to the refrigerator, than a bundle of insulation for the ceiling...
Tomorrow - DRYWALL!
at 10:15 PM No comments:

It's beginning to look a lot like pantry, with every nail I drive

I only ended up getting two things crossed off the list, but it certainly took all day.  First there was the completion of the garage wiring.  This included terminating the feed cable for the porch outlets into something other than a spool of romex in the attic.  I got it snaked around the main heating duct, stapled down, and terminated into a 4S box above the panel.  Then I needed to clean up the panel wiring because it was a complete mess.  Power off to the garage, rewire the panel, and then it was on to the rewiring of the light switches.  This was the item that was actually on the list but it needed the first two to get done.  This lovely task involved removing conduit, pulling out all the wires that were in much if the modified conduit, et cetera et cetera et cetera.

Then that trivial door...

The framing, such as it was, came out pretty easy.  Bang bang, a little new framing, some precise shimming, heavy duty screws, a four-foot level, screw screw, LIFT the door into place, and voila you get a new door into the garage.  Sharon tested it with a laundry basket, but it could have been wider.  This would have required more framing effort and would have left no place for the light switch into the garage.

Here's a picture so you can see that I'm not just making this up. 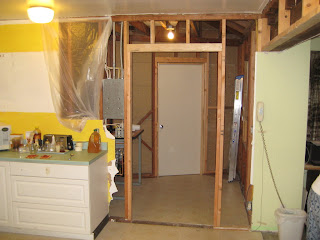 The butler's pantry and kitchen progress continues apace.  I crossed 14 items off the list today.  There are 11 more to go.  Let me twiddle on for a while here...

First up was the shopping.  I got my plan together and went shopping for drywall, insulation, studs, wire, electrical boxes, romex clamps, a water filter, paper tape, some drywall compound, screws, a pre-hung door, and some paint and primer.  Naturally, this takes up approximately all of the remaining room in the garage on top of the cabinets and the furniture form our recently returned college graduate.

Then the demolition, and that big giant pile in the previous post.  Apparently the house is made out of enormous piles of stuff.  And all of it is heavy, and dusty.

So last weekend we (I) pulled down the ceiling which was made of plaster, and covered in about ten inches of blown-in insulation.  I can assure you it made a stupendous mess.  Then there was the triumphant moving of the electrical panel - four hours of no power to the house. 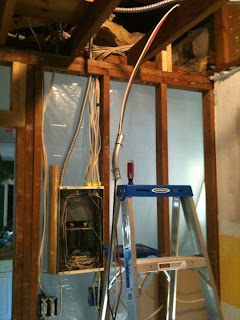 The above picture is the "during" shot.  The panel eventually ends up in the stud bay to the right, approximately where the ladder is.

So last night and today, I...
Demolished the existing pantry closet
Demolished a couple of feet of wall in the kitchen
Drilled a bunch of holes
Ran new romex through the holes
Screwed electrical boxes onto studs
Built a new doorway into the room
Reframed part of the ceiling
Rewired the switches for the pantry and kitchen
Wired two circuits for the pantry counter plugs and the refrigerator

Tomorrow I'll...
Remove the existing door to the garage and the frame
Throw that sucker on the pile with the rest of the crap
Reframe the door rough opening for a larger door, that happens to be really heavy
Install the new door.  Did I mention how heavy it is?
Figure out and install the water filter for the refrigerator
Insulate the ceiling in the pantry
Put up some drywall on the ceiling - that should be fun as hell
Insulate the walls with all of that fiberglass insulation
Whip some drywall onto the walls.\

I would take more pictures but, it's kinda a small room and you can't see much in one shot.  Suffice to say, it will be beautiful.
at 11:24 PM No comments: