I often think to myself what other peoples lives, total strangers, must be like.  What are they thinking about now, I mean in the moment that I see them.

The other day I saw a young man, maybe 22 or so, Mexican, long white shirt, just like the two fellows walking alongside him.  He had a very confident stride, and a small ear stud with a star shape to it.  Was the star significant to him, and if so, what did it mean?  It seemed out of place on such a macho guy.  Why did he choose the white shirt? Is the social world he is in so rigid that all the men must wear the same shirt?  Where were he and his friends walking to?  What was the source of his confidence?  Was it bravado that he wore just to be tough enough for the street?

Just a few short weeks ago, it was still snowing at the cabin.  We went and worked anyway... 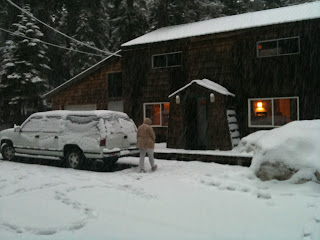 And yesterday it was about 80 degrees, we went swimming in the lake, and the interior of the house is actually looking like you'd like to rent it.

Andy asked me, "How do you stay motivated to keep working on it?"  I think it's because it is so relaxing to be there.
at 10:06 PM 1 comment: