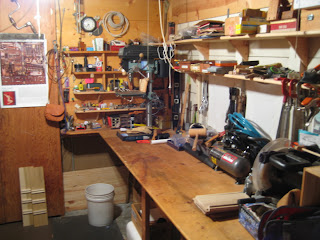 Now that I finally got a chance to meet her father through his tools, I think I like the fellow.  Rest in peace.
at 10:29 PM

Oh my... Bob, I can't think of a better tribute to my Dad. Thank you so much.

I remember going through the workshop of a boyfriend's grandfather after the grandfather had died. It was like dissecting his life. My boyfriend learned so much about who his grandfather was.

It's also why I love REAL "estate sales". It's like history. Fascinating and touching, and makes you think about what you'll leave behind yourself for people to discover.