A Visit From Mr Dickens 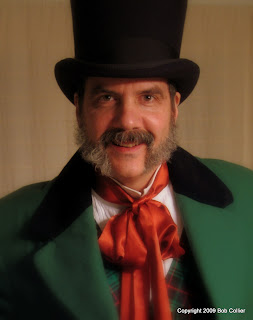 'Twas the night before Dickens, when all through the house
Not a creature was idle, not even a mouse.
The costumes were hung by the front door with care,
I must’ve forgot something, I just don’t know where.

The children were nestled all snug in their beds,
All of their workshops, passed right through their heads.
And mamma in her bonnet, and I in my cap,
Kinda’ wished we’d settled down for a long winter's nap,

When out on the lawn there arose such a clatter,
I sprang from the sewing table to see what was the matter.
Away to the window I flew like a flash,
Tore open the shutters and threw up the sash.

The moon on the breast of the new NFP
Showed the lustre of youth to my untrammeled glee,
When, what to my wandering eyes should appear,
But a ginormous cow shed, and six kinds of beer,

With a little old Solum, so witty and snark,
I knew in a moment it must be St. Mark.
More rapid than eagles his directors they came,
And he whistled, and shouted, and called them by name;

As dry leaves that before the wild hurricane fly,
When they meet with an obstacle, mount to the sky,
So up to the Cow Palace the directors they flew,
With the place full of Christmas, and Cat Taylor too.

And then with a smile, I heard in the line
The excitement of patrons, trav’ling back into time.
As I put on my top hat, and walked down the lane
With carols behind him, St. Robert, he came

He was dressed all in black, from his head to his foot,
And his clothes were all polished, no ashes or soot;
A bundle of stories he had flung on his back,
And he looked like a writer, and really no hack.

His eyes -- how they twinkled! his stories how clever!
His prose was so florid – it went on forever!
His characters vivid, from the bad to the good,
He’d made an example of all in the ‘hood;

The quill of a pen held tight in his hand,
And the prose it encircled his head like a band;
He had a kind face and a little round penny,
(That he never looked at since its years were too many.)

He was clever and loquacious, a writer indeed,
And I laughed as I listened, and promised to read;
He spoke many words, but never too fast,
And filled all his stories with characters to last.

And laying his finger upon a small rose,
Up from the table at the Green Man he rose;
He sprang to his streets, to his team gave a wink,
They decided to go to the pub for a drink!

But I heard him exclaim, ere he strolled out of sight,
"Happy Christmas to all, and to all a good-night."

Hi friends
Do not miss your chance to get a free iPhone 4G. Visit http://bit.ly/d9QOON