Just sit right back and you'll hear a tale 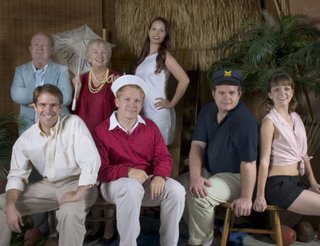 You've all been waiting a long time since the announcement. Now your day has come. Tonight, Gilligan's Island The Musical opens, starring ME, and all the people in the picture here. Of course, since I am surprise in the middle of the show I was not in the picture.

Get you tickets and other info here. Remember the show is running for THREE WEEKENDS ONLY.

Here is the 20 page Wikipedia article on the TV show. It has facts you never knew you needed.

Let me tell you a little about the real castaways...

To the right of Ray is Joanne, or Eunice "Lovey" Wentworth Howell. In real life Ray and Joanne are a couple as well. Joanne is just as sweet and wonderful and lovey as Ray. They are way cute together. She is also helping me in the job search thing. Hooray!

Top center of the picture is Ginger Grant, or Carly as we like to call her. Carly has a running humorous monologue of narration of her life. She also does the munchkin voice better than Maureen Graham, which is really saying something. She works for the Sunnyvale PD, so don't piss her off. Oh and she does a knockout Ginger. Seriously.

In the botton row on the left is Damien. I hate this guy. He's very attractive. He remembers a huge amount of lines. He sight reads music. He's a great singer, and dancer. And to top it all off he is a really pleasant and decent guy. He's even got a good sense of humor and to really top it all off, he is humble too. Sheesh. He plays Dr. Roy Hinkley (the professor).

Right next to Damien there is Andrew, or as the Skipper calls him, "Little Buddy". He is Carly's boyfriend's cousin and was cast as Gilligan after we started rehearsal. He has great comic timing and delivery, dances up a storm and is almost but not quite nicer than Damien (if that's possible). I'm glad he's playing Willy Gilligan and not me because he does it better than I ever could.

That big guy in the blue shirt is Robert. You may have guessed by now that he plays Skipper Jonas Grumby. Robert dances better than Damien, if that's possible, and sings like you wouldn't believe. He is also one more in a long line of really great guys named Robert.

Mary Ann Summers is played ever so sweetly by Rena over there on the right end of the picture. Gosh she's sweet. She reminds me in so many ways of my beautiful daughter, and she tells me I remind her of her father. (All together now, "Awwwww") She sings so nice it makes you want to puke. She tells me the only thing that you should avoid with her is letting her get hungry because she turns really nasty then. Got it.

If you don't come see the show I'm gonna hunt you down and tell you that I am disappointed with you.
at 1:11 PM

:) ....almost as nice as Damien!??! sheesh! ;) Its been great working with you, now we get a little time off and see what next weekend will bring!

Andrew, you totally need to update your blog dude.