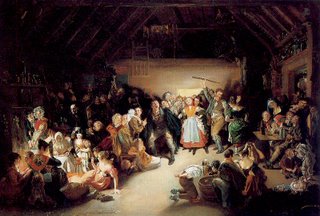 Tonight is that holiday that keeps getting bigger; Halloween. This year it will be different. I'm in that show you may have heard about so I can't do the trick-or-treat thing.

But that isn't so important today.

Last night as I was depositing a check at the ATM I saw a bad pedestrian accident on the road. It looked very serious as they loaded the patient into the ambulance, with a great pile of medical debris on the pavement where the patient had just been. Traffic in that direction on the road was rerouted through the shopping center and there was a somber crowd scattered about. Four police cars, a pair of fire trucks and a lone ambulance with all their serious crews attended the scene.

Shortly after I got home we got the call from our friend. The pedestrian was her mom, our friend Shirley. She had died in the accident. I had known her as long as I have known Sharon, and Sharon knew her from when she was in grade school. She was Sharon's mom's best friend. They lived across the street from each other when their kids were little, and they were close ever since.

Shirley started out in the middle of the block, probably between cars. It was dark. She was crossing Woodside Road, a four lane road that is a main thoroughfare in Redwood City. She got as far as the first lane. She often said that she didn't want to waste the time that it took to walk to the crosswalk and wait for the light, even though her family told her is was foolishly dangerous. Not to be too dramatic here, but the shortcut cost her the rest of her life. She was 70 and in good health. Unfortunately the unlucky driver will now have to live with what must be a very terrible memory.

Today all that remains are some blue painted outlines on the pavement where the car, and Shirley, came to rest. It's very sad, in a crystal clear sort of way.
at 2:26 PM

I am so sorry for you loss. I'm also sorry for how contrite that sounds. My heart goes out to you and especially Sharon and Shirley's family.

I figured that you would write something about that horrible night and the loss of our dear mutual friend Shirley. Mere words are not enough to convey my sadness. I still wish she had crossed at the crosswalk!! My love to you Sharon, the kids and of course, Lydia.