Apparently, there is no end in sight for the merriment around here.

We had a wee party with some but not all of the cast of the Naughty French Postcards cast; maybe there was 45 of us.  These people, it is written, can party with the best of them, or at least as long as the best of them.  At 5:55 AM, I told the last three guests that it was time to stop playing naked Twister and go to sleep.  Leading up to the end, we had lots of fun singing and playing along to Rock Band; actually, only four of us did.  The others appeared to be content snapping NSFW pictures or simply rolling their eyes.  For my part, I learned that standing there singing, even very heartily, without a stitch on, allows you to get cold in short order.  I suppose if I had lots of stage lights on that things would be different, though I doubt that would be any more flattering. 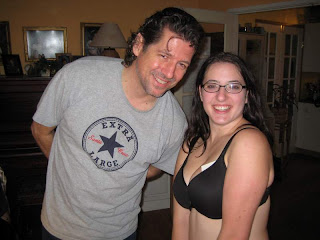 Then, wouldn't you know it, a certain mother-in-law of mine had an anniversary of her 39th birthday. Decorum dictates that *which* anniversary is left to the reader's imagination but let's just say that it was the sort of anniversary that you would expect there should be a big ass celebration for. Now, of course, there was an element of surprise and danger to this; the party was a surprise and the danger was that the birthday girl would find out. We, being all crafty and stuff, kept the whole thing on the down low so there was only a scintilla of a hint about ten minutes before. At the fateful moment, is was indeed a big surprise, and everybody said it was just about the best party they'd been to. Of course they hadn't been there the week before with all the topless women. 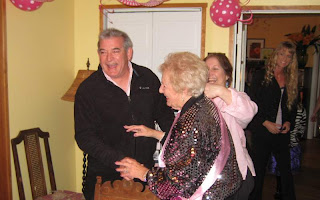 When I'm not partying, I often get up and go to work in the morning. Our little company is getting a big upgrade in the structure department. We are being acquired by a much larger company. This event is often viewed by the employees of the acquired company with great skepticism. To date, I have only heard good things, and I have a pretty optimistic outlook on the many changes to come. In one view, it is a fantastic growth opportunity for me. I know that I am ready for it.
at 9:34 PM