So, I "do" Renaissance Faire. I have a lot of friends who have "done" Renaissance fairs for many years, most of that time in their formative years at a place known as Blackpoint Forest in Novato, a rural and suburban town north of where I live. The devotion to the fair that was held there for many years is very, very deep on the part of hundreds of my friends and acquaintances. Most everything about the place and time holds deep meaning for them, and naturally they feel a lot of passion for it. It's a life-defining phenomenon for many.

I visited that fair twice or perhaps three times as a patron and as a true insensitive friend, I hold little reverence for the entire Blackpoint phenomenon. On the other hand, there was born an entire hobby world inhabited by thousands of fantastic artists and storytellers and in that whole gamish there was a really cool pewtersmith that made iconic pieces. Many of the old faire folk have them and I've always admired them. The pieces are treasures.

So about a year ago I got a goblet. It was heavily tarnished and someone had literally used it as a hammer. I used a mallet and wooden block to get it back into shape.

Then I polished it so it was as bright as you can get pewter. It looks stunning, and it fits my character, the Head of Household for Her Royal Majesty Elizabeth I.  Here it is on the kitchen counter right after polishing. 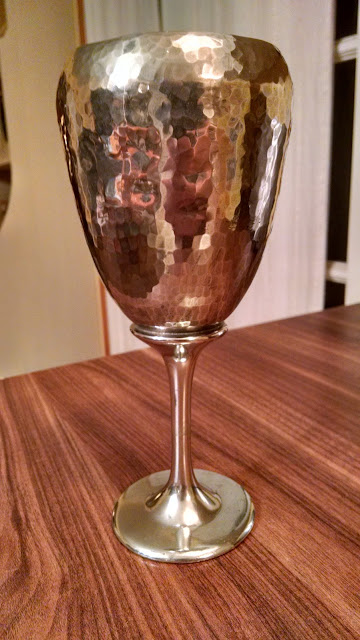 My friends who are Blackpoint old guard have commented, "YOU POLISHED IT!?!" because, at least to some of them, it's a revered relic. To me it's a a costume piece.