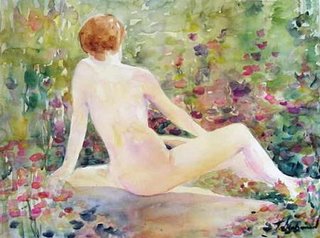 Late in the evening they come from the hills to drink at the shimmering pools of crystal clear apple juice. The eat sugar cubes from the sucre trees and laugh at the unicorns. Little men with tails lounge at the shore watching the mermaids play in the waterfall. The baby centaurs romp behind the twinkling bushes. One tall nude woman strolls down the leafy path framed by aspen saplings. She carries a baby winged kitten, clutched to her bosom to shield it from the gathering drizzle. It is warm and getting warmer and the sunlight glints from the diamonds floating overhead in the breeze having broken through the cotton clouds. The light, broken and bent, makes a thousand rainbows in the mist. The kitten meows as they come into the clearing and jasmine flowers open up in response, perfuming the air. The woman laughs and lays down in the gossamer fur that grows on the shore. A little boat appears around the bend. The woman spies her love, strong and supple, graced with powerful hands and a soothing voice. She closes her eyes and imagines a world where she and her love can escape to become their true selves, a world unlike anything they have known before this day. At first her dream is beautiful, but then her nightmare begins. Unable to wake she sees her world crumble to be replaced by an alien place.

In her imagined world there are things called cars, and people talk on little boxes they hold in their hands as they race towards certain dissapointment in stone buildings. Much of the ground is strangely hard and gray. Walls of stone divide them from the others of their kind and they wear bulky coverings that obscure their forms. The old ones grow feeble and are cast out of the so called homes. Violent suffering is common, driven by jealousy, mistrust and fantastical beliefs in mythical other worlds ruled by hate filled gods. Babies go hungry while some live in dwellings so fanciful that few can imagine. There is sickness untended for want of paper of symbolic value. A pampered few preside over the masses, making rules no one can understand, making statements that embarrass even the children. Petty fights over long dead ancestors infect the progeny with hatred. Death is the prize for a square of sand in the hot sun.

Her nightmare is broken as the kitten licks her nose. She rouses slowly as her love comes ashore. He rises from the boat, rainbows glistening off his taut flesh. He walks towards her and she rises to embrace him. As their arms close round each other, she nestles her face into the warm corner between his neck and shoulder. The press together and sigh in delight. They walk into the pool embracing each other as they float. She speaks first.