Yo Ho, Yo Ho, A Pirates life for thee 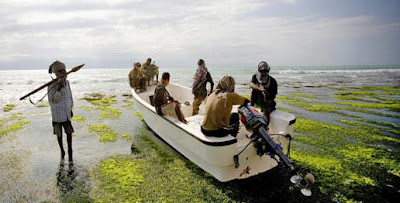 Well it seems that all you need to defeat the pirates is three bullets and an ice pick. I suppose it helps if you have snipers with night vision scopes and your target on a 100 foot rope line.

I predict that the piracy trade in Somalia is going to become quite a bit less attractive as a career path, soon. Now that the pirates have pissed off America, we will probably help the other nations involved realize that the status quo of simply paying the ransoms is making things worse, not better, and that pirates are gonna have to start DYING. In a few months someone is gonna sink a pirate craft, and kill a lot of people who chose violence over civilization. And this will be a further wake up call to the rest of the people on shore to get their shit together and do their own nation building this time.

Hey Somalia, Game Over. Don't bother asking for any more help unless you are willing to man up and form a real government. There won't be an UNOSOM III.
at 9:42 PM

It's about time somebody did something about that.

US pay them a randsom? Riiight.

history has shown that killing pirates is much more effective than paying them off.

The U.S. paid off the Barbary pirates for years, before one of them pushed the limits and attempted to extort a bit too much before we sent in the Marines ("To the shores of Tripolli")