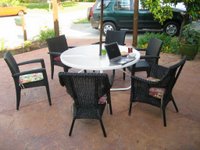 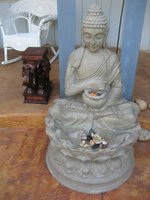 The yard continues to get better bit by bit. This weekend we got some cool chairs and a virry restful fountain to make purdy noises while we relaxify. That's the elephant I mentioned earlier there on the left.

We also went to see a host of theatrical extravaganzas like Mame (for the cape thingy) and Hamlet and Lion in Winter and Comedy of Errors. We saw lots of friendly faces.


Early this month a fellow we knew well enough to call a friend suffered enough mental pain to cause him to suddenly take his own life. Everyone was fairly shocked as this was quite unexpected. We attended a memorial to Dave on Saturday and the church was full. I was moved by what his family and friends had to say about him. He was a devoted father and husband, and he left behind quite a few people that really loved him a great deal. Dave was a man with a very unusual sense of humor and way of expressing himself. He was always genuine and a pleasure to be with. It was the most difficult memorial I had ever attended. I can't imagine how bad Dave must have felt to leave behind what he did.
at 6:46 PM

Condolences about your friend. I'm sorry to hear that. I also hate how trite that sounds, but the emotions behind the words are real.