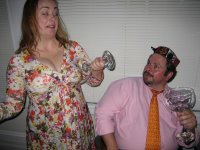 Shortly after this Nate made Kate an El Diablo in the big old glass. He told her there was no more alcohol than usual in it, just more mixer. She seemed truly skeptical. 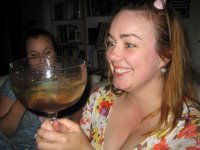 It turned out to be a wee party indeed, with one other guest (Cyn) beside our hosts. There were various festive beverages made with great vigor by Nathan who managed to shake the Manhattans so gleefully that the shaker adopted a jaunty top-free pose thus spilling some of the precious mix on the floor and his shirt. Kate dutifully cleaned the floor and Nathan tried to tell us that he meant to do that. I charitably trained Nathan how to make the perfect martini, which all proclaimed to be really good. Um... yeah! 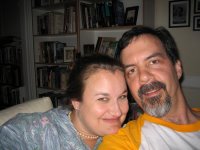 We had a nice evening of laughing mostly about silly fair(e) stuff. The other three talked about their ex-spouses, or soon to be ex-spouses. Cyn told a hilarious story about her ex-husband which I shall not repeat here. There was a Marie Antoinette challenge (with the new glassware of course) but Nathan and I just watched in calm amusement and wisely did not try to best our opponents. There were pictures but you'll need written clearance from the ladies to see them.
Late in the game Nathan called up Chicken and Waffles, a place that serves, um... chicken and waffles oddly enough. The other three assured me this was a great delicacy, whereupon I expressed my doubts. Sadly they were closing in a few minutes and we couldn't make it there in time for takeout. Too bad, I think.

Since the party I have been doing an exciting activity I like to call "work". This will be followed this weekend by something I like to call "not really working".
at 7:16 PM

I made your blog!

Duuude, Roscoe's House of Chicken & Waffles just off Fairfax has been a hot destination for all the movers&shakers in West LA since I was in college, and that's... well,... a long time ago. It rocks.

Maybe I'll make it to the chicken and waffles place eventually.

I'm telling you. Chicken & Waffles is (are?) the bomb.