One down, three to go

This weekend was so incredibly full of fair stuff it is hard to know where to start...

Let's start at the bottom so to speak. Here are some of our fairmates cutting up backstage. Yes, that is a thong on Nora's head. (Yes it was brand new right out of the little bag it came in.) 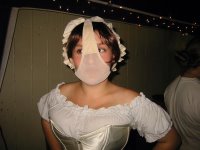 Peter thought it looked inviting... or something like that. These bookish Dickens-reading types really are a pretty staid bunch. 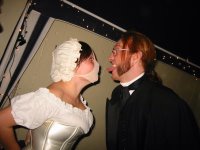 Then Ryan decided that it wasn't enough to appear in just the union suit, so he grabbed a Dark Garden corset model to doll up his outfit backstage at the French Postcards show... Nice package Ryan. Get a room. 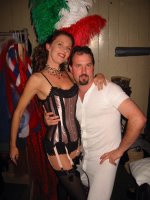 The postcards show is clearing the streets as people abandon all other activities to see the, um... boobs. The Mad Sal's show was experiencing "loss of crowd" on Saturday much to their dismay.

Backstage you get a lot of this "relaxing" sort of behavior. Here is Malaia keeping the floor warm. 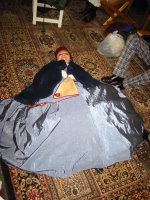 On a much more eruidite note there was our darling daughter doing a stint in the Dark Garden window display. By all accounts she was a very good model. 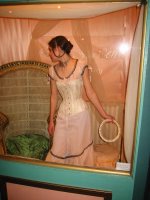 No pictures of it (I left the camera backstage!) we saw a proposal of marriage (for real) out on the dance floor right after the Congress of Vienna waltz. It was touching, then we all waltzed just to celebrate.

Scenes are getting better, the audiences are getting entertained (we have a new "block the street" strategy for enticing people to stop long enough to watch scenes) and we are all having quite a bit of fun. Come and join us at Fair!
at 9:47 PM

Our Nora. She is such a delicate little flower.

I dunno about "inviting"...but I'm always up for "ick-ing out" my friends when I've got my Heep on.

Looking forward to helping Mr. Brownlow wonder "where the boy is?" next weekend.

Yeah. Nora. Delicate. Right. Remember, this is the young lady that introduced me to the phrase, "Tits for days." Delicate indeed.

Yo Heep dog: I'll call you up to do the scene again. So far you are the best extra gentleman that I have auditioned.