It's my party and I'll blog if I want to

You probably already know it's my birthday. And thank you to everyone who has been so generous thus far.

Third weekend of fair was pretty good. There were lots of patrons, lots of sick cast members, and lots of fun. The scenes in the streets have an unnerving variabilty to them, they never seem to go the same way twice. That said, they always feel unique and they seem to be well received. Hooray!

The postcards show appears to have grown to near legendary popularity. Patrons start lining up at 4PM, 90 minutes before the show, just to get in. It's crazy what people will do just to see some skin. We are seriously considering adding another show. There will already be an 8PM show for participants on Saturday.

Hearing that was my Birthday today the entire female cast of the show gave me a special happy birthday song, topless. There are fifteen of them, so that makes something like 30 nipples pointed right at me. 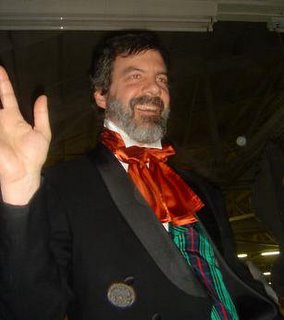 The look on your face was priceless. =) Sorry we were 15 nips short- we were hoping you didn't notice!

Happy Belated Birthday, Bob. I can't imagine a better birthday present for you than boobs. :)