What the hell is he wearing now 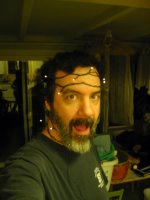 I am "sobering up gradually" as my neighbor Franklin used to say. Franklin was really cool, even though he was in his mid eighties. He wore a beret, spoke a few languages, and had run a pump sales company. He passed away a few years ago. I miss him sometimes. He was damn funny.


Now that I have recovered from Monday and Tuesday night I can share the pictures.

Now it seems that Sharon has found out (somehow, I don't know how) that I am a fan of boobs. Go figure. Maybe Grace told her.

She got this card 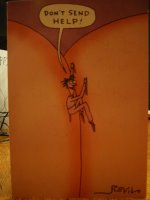 a few weeks ago, way before the Sunday incident that will now be known as "The Thirty Nipple Singalong".


Then out comes the cake. 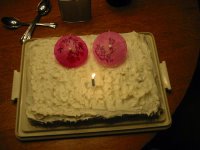 With nice full lusty festive pink umbrellas. I like the one candle effect. It makes it easier to say the number forty five since it reminds you less of a raging gasoline conflagration. 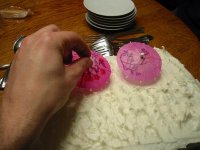 They were evenly sized, always a plus but certainly not required. 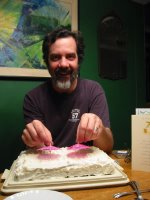 They tweaked almost as good as the real thing... 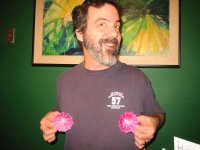 and they make a stunning ensemble, don't you think?

Now if you aren't laughing too hard to type will you pretty please share your comments with all of us. (yes, even you)

Oh yeah, Tuesday night we got together in full Dickensian costume with a three other folks to sing some Christmas carols at a preschool cookies and singing event. The kids didn't seem to really care all that much, but the parents thought it was great.
at 9:21 PM

The pink is very, um, manly. Or something.