Well, we went bowling this afternoon. The Children of The Other Books were going up against the Dickens Family Parlor cast. I know I have been bowling before, but I can't remember when it was so I guess it was more than a decade or two. Therefore, when I started I had no idea what the heck I was doing. Luckily my teammates and an onlooker or two gave me a few pointers. In my first game, I bowled something like 56. In the second game I bowled 117, opening with two strikes.

So eventually, we totalled everything up and Otherbookistan had bested the Parlor People, by about ten points on average. We all had a ton of fun. 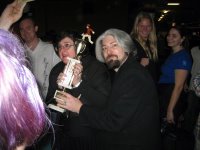 Here's a pic of our esteemed directors holding the trophy.

At first I thought I might not have much fun. After I go the hang of the game it was a blast. I'm going again.
at 11:47 PM

117! That's great, Bob! The denizons thank you for your great service.