And so it goes

We had ourselves another super sized weekend. On Saturday we went out looking at houses to see what the market is like. We do this often. It is a good way to keep from friiking out when you look at a house you like and might consider living in and then see that they want all of the money you will ever make just to buy the garage. We saw a couple of tear downs, or "scrapers" as we call them, one in Redwood City and one in San Carlos, both were north of $750K. The first had been inhabited by a handy person who fancied themselves much better at remodeling than they really were. Suffice to say the house was really fucked up. The second wasn't remodeled but it had SERIOUS rot problems.

By now the Suburban was seriously acting out it's recent demonic posession. On Monday morning it was taken by ambulance to the car hospital where it had emergency surgery to remove and replace it's fuel pump. ($628.03!)

The ambulance driver Dave had LOTS of tattoos. But now I'm getting out of order, aren't I? 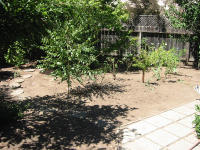 So on Sunday I decided to cross off an item on the casa trabajo list and get compost into the back garden. First we see the naked, worn out soil in the garden. 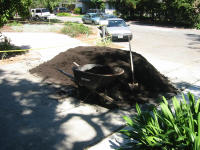 Then we see the ginormous pile of compost in the driveway. 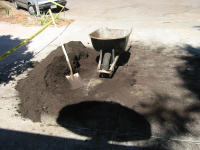 Which then turned slowly into a very small pile. (No, the children did not help.) 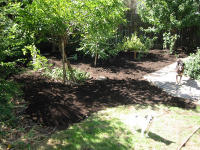 And finally the pile was all gone and covering the garden a few inches thick. 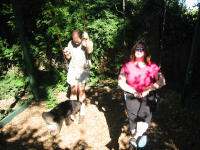 Then (while I was still covered in mulch) our friends Kate and Rob arrived for a swing on the swings, a swim, a spot of pizza, some drinkies,and some playtime with the doggies. 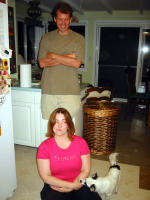 Kate said this was the face her mom makes. She did not specify under what conditions he mother makes this face. We can only wonder.

Then they* foolishly decided to bug out before the movie, Shaun of the Dead, which was pretty damn funny.

omfg, that is the funniest picture of me I've ever seen. I look EXACTLY like my mother. that friiks me ow.