Had a wonderful dinner tonight at Jakes by the Lake, our new favorite restaurant. Three of us had the Caesar salad with sea bass. Jess had a candied walnut salad that had mint in it. I stole some. Damn that was good! The desserts kicked booty as well. As we said, "Elbows on the table, stirring my ice cream, Emily post; spin, spin, spin.

We got the sleeping arrangements figgered out. Big problem was that the married couple had ended up in the double bed, not the queen. That'd be AOK if we were lilliputian, but oddly we aren't. 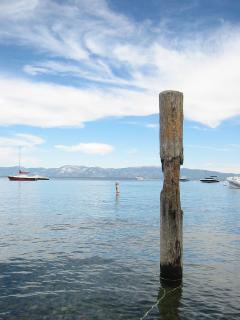 Other than hang out and eat, we didn't conquer much today.

I did write three poems for my book, but they will all need major style upgrades to get them from weak to moving.

Now its off to fix the live journal to add links.
at 9:15 PM

Wow, that's gorgeous. The only thing I saw today was a messy theatre and a bunch of smelly actors.